skip to main | skip to sidebar


In the Rebirth plot, a hero or heroine falls under a dark spell which eventually traps them in some wintry state, akin to living death; physical or spiritual imprisonment, sleep, sickness or some other form of enchantment.

For a long time they languish in this frozen condition. Then a miraculous act of redemption takes place, focused on a particular figure who helps to liberate the hero or heroine from imprisonment.

From the depths of darkness they are brought up into glorious light. Think Sleeping Beauty, Snow White.

One version of the Rebirth plot

In Sleeping Beauty, a king and queen have a baby daughter. They invite seven fairies to the little Princess's christening, and six in turn bestow great blessings on her--beauty, grace, goodness of heart, and so on. But before the last can speak an old malevolent fairy bursts in, furious at not having been invited, and lays a deadly curse on the child: that she shall prick her finger and die before she grows up. The seventh good fairy can only commute this to a sentence of a hundred years of sleep, with the promise that eventually the Princess will be liberated.

The dark prophecy is borne out, the heroine pricks her finger, and swoons in to unconsciousness.


Decades later, a prince from antohr land chances to pass the castle, makes his way through the hedge of thorns, finds the Princess in her remote prison and wakes her with a kiss. The whole community of the castle stirs back into life. The Prince and the Pricness he has 'won back from the dea' are married. 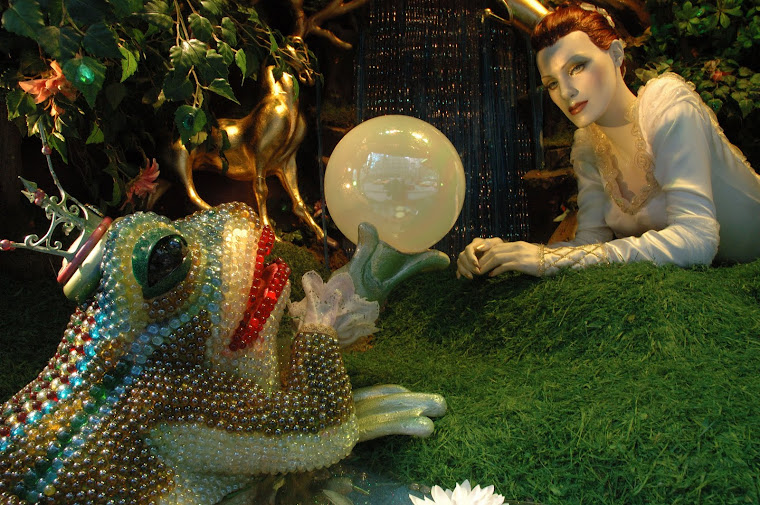 Another version of the Rebirth story

In this version it is the hero who is the central imprisoned figure of the story, trapped by dark enchantment, and it is the heroine who eventually liberates him. As the story unfolds, however, she herself also falls into a state of imprisonment, trapped by the hero when he is under the dark spell--so that we finally see each being liberated from the grip of the dark power by the other.

In the Frog Prince, a young princess is out playing one day with her most precious possession, a golden ball, when it rolls away and sinks into a deep pool. She is in great distress, not knowing how to get it back, when a frog hops up and offers to recover it--on the condition that she will take him home and allow him to share her food and her bed. She lightly gives her promise, the ball is recovered and the Princess goes happily off home, forgetting all about her promise to the frog.

Eventually there is a knock at the palace door, the Princess opens it and is horrified to see the frog, come to claim his part of the bargain. In terror, the Princess slams the door, but when her father the king hears what has happened he sternly insists that she must fulfill her promise. With a sense of loathing she allows the repulsive little creature to eat from her plate, and even to share her bed--and when he disappears the next morning, she hopes she has seen the last of him.

But her nightmare is not over. The frog returns, to share her bed for three nights; and only on the third morning does she wake up to find that he has turned into his true self as a handsome Prince. He explains that he had been placed under an evil spell by an enchantress, and turned into a frog; with the condition that he could only be released if he could persuade a Princess to let him share her bed for three nights. The Princess looks at the Prince she has unwittingly redeemed with almost disbelieving joy and love, and he takes her home to be married.

No posts.
No posts.
Home
Subscribe to: Posts (Atom)

Beauty and the Beast 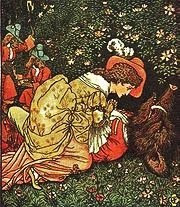 A father who has three daughters goes on a journey and loses his way one night in a forest. He is drawn to a mysterious, empty castle, where he finds comfort and hospitality, although he never sees anyone until he is about to leave--when he is set upon by a terrifying monster, in semi-human shape.

The Beast allows him to leave on condition that he sends back his youngest daughter to live at the castle. Beauty comes to the castle, full of dread, and although she is well looked after and eventually comes to like the Beast, she cannot possibly accept his proposal that she should marry him. She feels terribly trapped, but eventually the Beast allows her to return home for a while to tend her father who has fallen sick, and she breaks her promise to come back.

Then in a dream, she sees the Beast dying of grief. She rushes contritely back to the castle, just in time to find him lying in the darkness in the garden, apparently dead. She is so overcome by the love which as been secretly growing in her that she flings herself down to embrace him.

He stirs back to life, and says that he only wanted to see her once more; he can now die happy. She says that he must not die, she cannot live without him.

At these words, the dark castle is suddenly filled with light, music plays and she sees standing before her a handsome Prince--who tells her that he has been turned into a monster by a wicked enchantress, and that he could only win his release if a beautiful virgin would freely consent to marry him.

This same sequence is common among all the Rebirth stories:

1) A young hero or heroine falls under the shadow of the dark power;
2) for awhile, all may seem to go reasonably well, the threat may even seem to have receded;
3) but eventually it approaches again in full force, until the hero or heroine is seen imprisoned in the state of living death;
4) this continues for a long time, when it seems that the dark power has completely triumphed;
5) but finally comes the miraculous redemption: either, where the imprisoned figure is a heroine, by the hero; or, where it is the hero, by a Young Woman or a Child.